With the participation of 160 chess players from 18 countries, began on August 18th in Corinthos Vrachati the first International Chess Tournament “Isthmia” organized by the P.S. Peristeri and S.A.K. “Argonaftis.”
The games take place in the modern and friendly hotel “ALKYON” where the comfortable and beautiful playing hall together with the experience of the organizers, guarantee the success of the organization.
In the tournament participate20 GM, 3 IM, 2 WIM, 3 FM among them the Dutch Sergei Tiviakov (European Champion 2008), the Ukrainian Vladimir Baklan, the Turkish Suat Atalik, the Russian Sergei Volkov and the Greek multi-champions Christodoulos Banikas and Vassilis Kotronias.
In the opening ceremony the president of PS Peristeri and general secretary of S.A.K. “Argonaftis” Mr. Antonis Bellos, thanked the Municipality and the authority of the Peloponnesian region for their support, mentioned the goals of the organization and promised that the organizers will do their best for the success of the tournament.

The Mayor of Velo-Vochas Municipality Mr. Annivas Papakyriakos took the speech in his turn and expressed his satisfaction and excitation about the organization, promising all possible assistance in the future.
In the opening ceremony also attended the treasurer and Steering Committee member of the ESO also referee of the games, Mr. George Mihailidis. Note that the President of the Federation of Chile, Mr. Daniel Yarur participates in the tournament.

Chief Arbiter of the event is Mrs. Efi Saltamara and Head of the Technical Administration Panel is Mr. Michail Prevenios.
Concerning the games, in group A the strong players prevailed with few exceptions. The most important were the draws of Panagiotis Zeppos against GM Jojua and Stathis Linos against Fide Master Alexandros Gogolis. In group B we can mention the draw that Panagiotis Bravos succeded against Antonis Pavlis.
For additional information, results, photographs and videos you can visit tournament’s official webpage: http://isthmia11.peristerichess.gr. The webpage also provides live coverage of 30 boards and Live Streaming. The second round starts on Friday 19/8 at 17:30 in room “Evangelia” of the hotel “ALKYON” in Vrachati Corinthia. 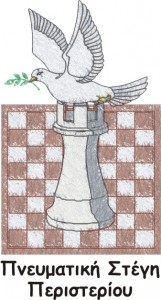